Supporting the community services of Chabad

On June 7th, 2016, Benjamin Landa attended the Port Washington Chabad Silver Anniversary Dinner, of which he is an active member of the organization. Chabad is a community service that provides programs and services to people of all faiths, races and countries of national origin.

A 25,000 square foot parcel of land in Far Rockaway, Queens was donated to Yeshiva Darchei Torah this week by Benjamin Landa and Ben Philipson, business partners and co-founders of SentosaCare, the largest nursing home network in New York. 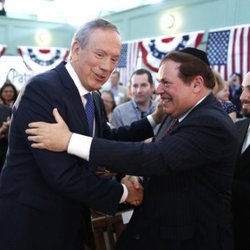 While George Pataki was unning for the White House as per with his announcement in May 2015 came the support of many prominent Orthodox Jews. Among these is Sentosa Nursing Home SEO Ben Landa, as well as entrepreneur Herman Friedman, who were seated at the front of the podium listening to Pataki’s speech. Read More

The Buffalo Business First digital newsletter discusses the acquisition of two nursing homes in the Buffalo area. It states that the new owners have a solid nursing home track record throughout the state of New York, with Benjamin Landa as the sole owner of Receiver Services.
Read More